More efficient, more spacious, quieter, cleaner and just, well, cooler than ever before. The new Honda Civic Diesel isn’t only the best Civic diesel yet, it’s one of the best Honda diesels ever made. Here are 10 reasons why. 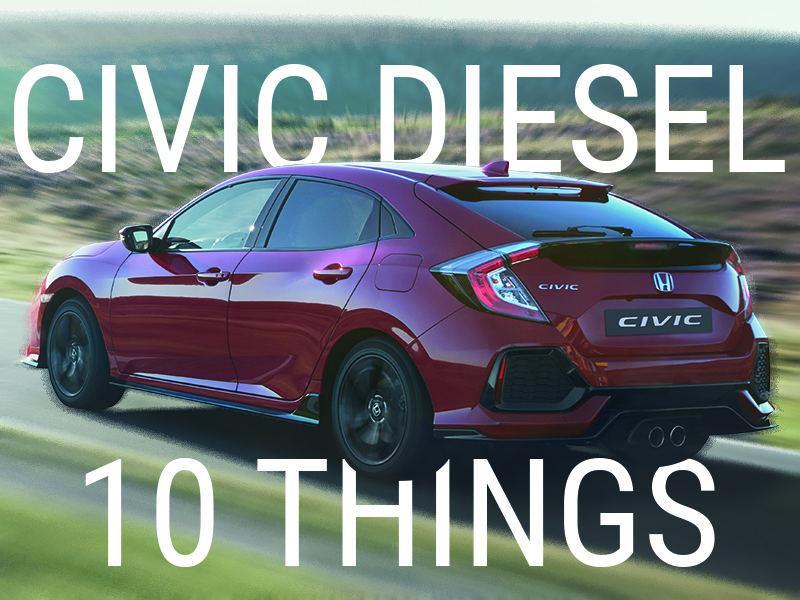 The car’s 1.6 i-DTEC engine is among the first to pass the Real Driving Emission (RDE) procedure – a new series of tests introduced to reflect real-world conditions more closely. Plus, it emits only 93g/km of CO2 per the New European Driving Cycle (NEDC) test, making it 22.6% cleaner than the average new diesel car in the UK, and 25% cleaner than the average new petrol car in the UK.

03 It packs a lot of power into a small package

The engine features an advanced fuel-injection system, a turbocharger and an all-aluminium engine block to bring the weight down. The result: a car that’s a little less harsh on the driver – and a lot more powerful to boot. Speaking of which…

You know it, we know it. The biggest advantage of owning a Honda diesel is the cutting-edge and, in previous generations, Guinness World Record-breaking fuel efficiency – and the new Civic Diesel is no exception. It gets 80.7 miles to the gallon* – massive!
*NEDC figures

Just like the current CR-V and the petrol Civic, the new Civic Diesel is built right here in Blighty at the Honda UK manufacturing plant in Swindon, which means more British jobs – and less time waiting for the car to come out.

Like so many Hondas, the Civic Diesel is packing some seriously smart safety features. There are simply too many to list here, but standouts include a Collision Mitigation Braking System, Intelligent Adaptive Cruise Control and a Lane Keep Assist System, to keep you on the straight and narrow.

08 It’s an upgraded version of an award-winning classic

You’ve heard of the Civic – and for good reason, as it’s won countless awards: ‘Car of the Year’, ‘Best Company Car’, ‘Best Real MPG’… the list goes on. And trust us, there’ll be more to come in 2018.

The entry-level S model with manual transmission will start from just £20,120 OTR, rising to £24,925 OTR for an EX trim car with the six-speed manual gearbox.

The i-DTEC diesel engine joined the European Civic range in February 2018 – less than one year since the release of the standard petrol Civic. So what do you think, up for a test drive?