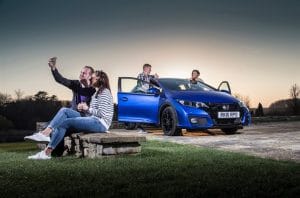 The Honda Civic is undoubtedly one of Britain’s most popular hatchbacks ever, and Honda has added to the current range with the announcement of a new Sport model.

This new variant has been styled specifically as a more aggressive and sporty version of the standard family hatchback. There are some subtle but attractive changes to the exterior which separate it from the original.

The Civic Sport’s spoiler has a unique colour coding along with 17-inch alloy wheels, both of which give the new release a striking resemblance to the Honda Civic Type-R. It also has a lower grille mesh and black lining on the roof of the cabin, which further add to this sporty image.

There have also been changes under the bonnet, where the advanced 1.4 litre i-VTEC single overhead camshaft (SOHC) engine has been tweaked to boost both the Civics’ environmental credentials and its dynamic performance.

This new Civic Sport delivers a maximum power output of 100 PS and peak torque figures of 127Nm. Its CO2 emissions are at 131g/km.

Because of the next generation Civic concept being unveiled at the Geneva Motor Show, (due in showrooms as early as the start of 2017) Honda UK is revising the current Civic range line up, to better meet customer demand.

With a 1.4 litre engine, the Civic Sport will become the entry level, with the SE and SR grades completing the line up.

Phil Crossman, Managing Director of Honda UK spoke regarding the announcement, saying: “The addition of the 1.4-litre petrol engine version of the Sport strengthens our civic family line up and makes the more aggressively styled version of our popular family hatchback more accessible.”

“The smaller engine makes the Civic Sport more economical and more efficient and therefore a much more attractive proposition.”

The all new 1.4 i-VTEC Civic Sport will be available in showrooms across the country from May onwards.