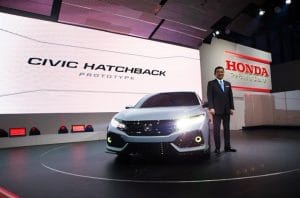 Honda CEO Takahiro Hachigo made his first appearance at the European motor show to unveil the prototype for the new Civic hatchback on the opening day in Geneva.

It has been a very busy year for Honda with a number of releases, but the Civic Prototype took centre stage for the Japanese manufacturer in Geneva on Thursday.

The Civic prototype is a preview of the 10th generation civic hatchback and is set for launch in early 2017.

The first of the Honda Civic Hatchback’s are planned to be built right here in the UK and will then be rolled out across Europe into the New Year.

The car itself promises to be of typically provocative design for a civic, have assertive dynamics and a range of all petrol turbo engines, with the car aimed at the core of the European compact market as ever.

This new car all goes towards a specific sales goal for Honda, which they have targeted as 200,000 units as a round figure for the end of 2016 in the European market.

Over the last year, Honda has released a number of new models including the Jazz, Civic Type-R and the HR-V, all of which combined bring their sales figures to around 160,000. This is a 17 per cent rise on 2015’s sales figures.

Everyone at Honda will be hoping with the push of the new Civic Hatchback that they will reach their goal of 200,000 units.

The Civic Hatchback Prototype was not the only announcement from the Honda stand at the Geneva Motor Show, however, with an apparent two more releases penciled in for 2016, but no more details were on offer.

There were also more details on the brand new Honda NSX supercar, which is bringing a lot of attention considering it is the first new NSX since the 2002 model.

While the US release was confirmed back at the Detroit Motor Show back in late 2015, no European info had until Thursday 3rd of March been stated.

Here at Cox Motor Parts we get excited about thrilling new cars like the NSX, that’s why we put together a fun infographic about the development of them through the generations. See it here.

Honda also announced news on developments in their green technologies, regarding the Clarity Fuel Cell.

Initially, it will be given a limited release in the UK and Denmark in the next 12 months through the HyFIVE programme, which is seen as the first steps in the commercialisation of hydrogen power in Europe.

All in all, things look very exiting from the Honda stand over in Geneva and the rest of 2016 should be a great one for Honda releases.